Why people with gut problems should go for 420 evaluations? 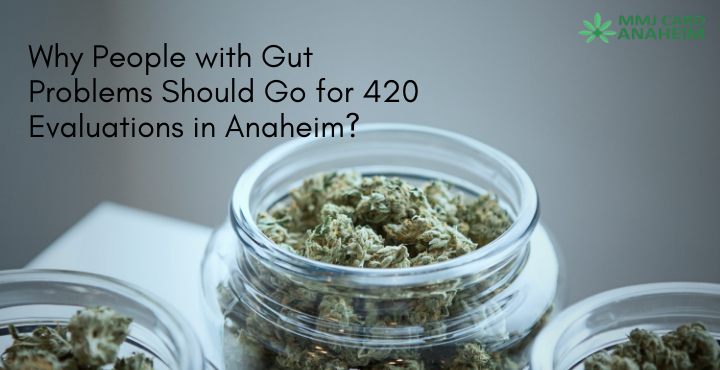 Why People with Gut Problems Should Go for 420 Evaluations in Anaheim?

As per the federal regulations, cannabis is illegal and included in the list of Schedule 1 Drugs. But, medical use of marijuana is legal in 37 states and others are also putting efforts towards legalizing medical cannabis. To use medical marijuana in a legalized state, you must obtain 420 med evaluations online or in-clinic in Anaheim. Not only this, you should get medical marijuana card renewal to continue the treatment.

Researchers have found that medical marijuana can help people with gut problems. The anti-inflammatory properties of cannabis are able to reduce IBD symptoms, appetite loss, bloody stool, diarrhea, etc. Read on to learn about gut health, the endocannabinoid system, and the use of medical cannabis in relieving gut problems.

Importance of Gut Health and the Endocannabinoid System

Previously, it was believed that the gut performs only the basic functions including digesting food, releasing nutrients, etc. Later, its involvement in physiological areas was considered. The gut contains trillions of organisms found in the body, and these include protozoa, parasites, archaea, bacteria, fungi, etc.

Researchers have found that there’s a link between gut health and mental health. And, PTSD patients have lower levels of some gut bacteria as compared to those who don’t suffer from this condition.

The endocannabinoid system comprises receptors (such as CB1 and CB2) in the immune system, nervous system, and peripheral nervous system. These receptors are found in the digestive system, and dysregulation of this system can result in inflammatory bowel disease, IBS, etc.

Researchers have found that anandamide levels are much lower in IBD patients than those who don’t suffer from this type of condition. And, the cannabinoids present in medical cannabis have anti-inflammatory properties, which can help reverse the symptoms of IBD.

As per the Crohn’s & Colitis Foundation of America, there’re approximately 1.6 million Americans who suffer from IBD. It’s good news for them to relieve IBD symptoms with the help of the medicinal properties of cannabis.

A retrospective study was performed in Israel on 30 Crohn’s disease, and the results were noted before and after cannabis consumption. It concluded that 70% of the patients reported a decrease in Crohn’s disease symptoms after taking medical marijuana. Nine were able to eliminate all prescription medicine use.

There’s a wide range of cannabis strains, and depending on the type of strain you use, you may experience a feeling of HIGH. In addition to that, you may also get sensations to feel altered, mood changes, problem-solving, memory, etc. CBD is a non-psychoactive component that doesn’t result in brain and motor functioning changes. Thus, patients considering strains that are high in CBD and low in THC don’t experience any HIGH sensations.

The conclusion is—dealing with gut problems can be a frustrating experience as the symptoms are quite difficult to control. Some prescription medications are also available in the market, but they may not provide satisfying results. Fortunately, medical marijuana is a great alternative to these medications.

Talk to an MMJ doctor to receive your 420 evaluations in Anaheim. Remember, in California, an MMJ card is valid for 12 months. And, after that, you need to consider medical marijuana card renewal consulting with the doctor again.